Out of stock
new

In It for the Long Run

In It for the Long Run is ultrarunner Damian Hall’s story of running a first marathon aged thirty-six, dressed as a toilet, and representing Great Britain four years later. His midlife-crisis running problem escalated to 100-mile ultramarathons and record-breaking bimbles, culminating in his 261-mile Pennine Way run in July 2020.

In 1989, Mike Hartley set a record/Fastest Known Time (FKT) for the Pennine Way, running Britain’s oldest National Trail in two days and seventeen hours, without stopping for sleep. Hartley’s record stood for thirty-one years, until two attempts were made on it in two weeks in the summer of 2020. First, American John Kelly broke Hartley’s record by thirty-four minutes. Then Hall knocked another three hours off Kelly’s time. Hall used his record-bothering run to highlight concerns for our climate and ecological emergency: his attempt was carbon negative, he created no plastic waste, and he and his pacing runners collected litter as they went, while also raising money for Greenpeace. A vegan, Hall used no animal products on his attempt. Scrawled on his arm in permanent marker was ‘F F F’, standing for Family, Friends, Future.

Packed with dry wit and humour, In It for the Long Run tells of Hall’s nine-year preparation for his attempt, and of the run itself. He also gives us an autobiographical insight into the deranged, custard-splattered, hedgehog-dodging world of ultramarathon running and record attempts.

Sorry, something went wrong and we weren't able to load product reviews at this time. Please refresh the page and try again.

In It for the Long Run
Damian Hall
Loading... Sorry, something went wrong and we weren't able to load the requested content. Please refresh the page and try again. 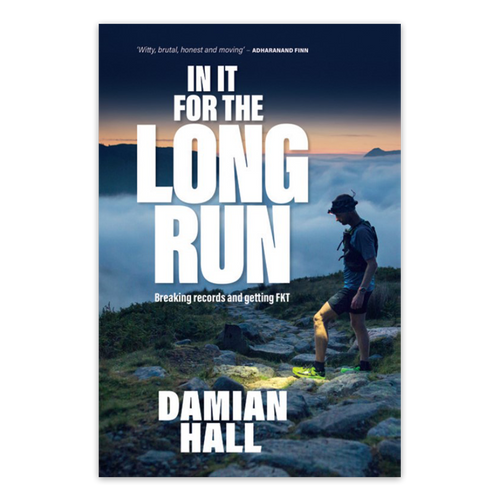 In It for the Long Run